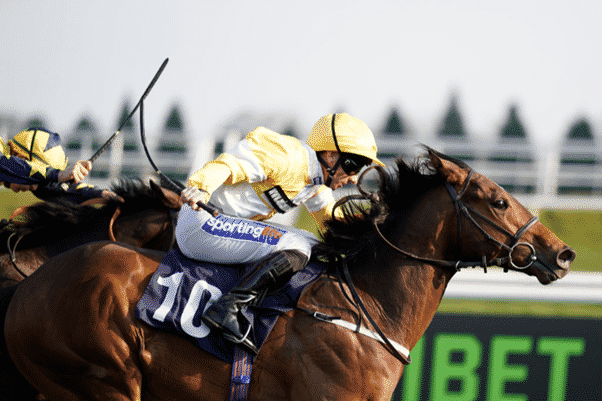 Show Me the Brocklesby!

The turf season is fast approaching and the feeling of excitement around the yard is palpable. Very soon, Musley Bank will be cranking up into overdrive – sending runners to every corner of the land, whilst basking in the sunshine of summery success. To wet the appetite some more, we thought we’d take a look back at one of our recent early-season successes. Show Me Show Me in the 2019 Brocklesby.

The Brocklesby Stakes is the traditional curtain-raiser of the turf season. Run over a distance of five furlongs at Doncaster’s Lincoln meeting, it offers early, forward-going two-year-olds an opportunity to lay down a marker for the season ahead. The best horse to win the race, in recent seasons, was the subsequent Gr.1 Middle Park winner The Last Lion, whilst last season’s victor, Chipotle, went on to bag two Listed contests later in his juvenile year (the Windsor Castle and Redcar’s Two-Year-Old Trophy).

Show Me Show Me was not a juvenile of the above’s quality, but as Musley Bank’s trainer remembers:

He was a natural from the first day we got him. He wasn’t overly big, but he had a great attitude and was incredibly straightforward to deal with. We luckily didn’t have to do too much with him to get him to Doncaster – he got himself ready for the day.

Show Me Show Me’s uncomplicated nature gave him an edge over his competitors that day, as his rider and three-time Brocklesby winner Paul Hanagan explains:

Everyone one of my Brocklesby winners have all had one thing in common – a good, calm nature. They all got down to the start nicely and took everything in their stride. If your horse can be nice and chilled when the others aren’t, that’s when you’ve got a chance.

Watching from an owner’s box that March day, with a dozen other members of Ontoawinner, was syndicate manager Niall O’Brien. Describing the colt as a ‘standout’ and a ‘classic early type’, O’Brien was on-hand to purchase the son of Showcasing for £24,000 at the Goffs UK Premier Yearling Sale in 2018.

Bred and brought to that sale by Whitsbury Manor Stud, Show Me Show Me is out of Springing Baroness; an unraced Bertolini half-sister to the Mill Reef winner, Ontoawinner-owned and fellow son of Showcasing, Toocoolforschool. Stud Manager Ed Harper tells the story of how he came by the mare:

I remember seeing Toocoolforschool winning the Mill Reef Stakes (Newbury, Gr.2) in 2014. He was a very important horse for us as it was Showcasing’s first year of runners and we were obviously trying to get the ball rolling with him. We then tracked down the half-sister in Hungary and bought her for a private fee to specifically go to Showcasing. I think it took her something like three full days to make the journey to Whitsbury. Luckily, she hasn’t had a get on a horsebox since, as she has only ever had to cross the yard to visit our resident stallions!

From Hungary, to Whitsbury, to Donny Sales – Show Me Show Me’s next step on the path to glory was to be North Yorkshire and Musley Bank. Part-owner O’Brien admits, on a stable visit in the November of his yearling year, that he felt the colt still appeared to have some filling out and maturing to do. However, by early-Spring, O’Brien remembers a ‘complete change’ in the horse. A change from a potentially early model, into a fully-fledged two-year-old.

This physical development coincided with several trips to the grass gallops at Malton; the place where the team began to see the extent of the horse’s ability. Hanagan looks back on those gallops with fondness – remembering thinking, ‘this horse may not win, but he will certainly run well (in the Brocklesby)’. Groom and exercise rider Mr Eireann Cagney also remembers being impressed by Show Me’s first gallops, stating that, ‘he was a two-year-old that ticked all the boxes – sharp, early and keen to get on with his job’.

That productive attitude came to the fore in the contest itself where, as Hanagan explains, ‘we were drawn on the flank and therefore couldn’t get any cover; but he adapted brilliantly.’ Show Me’s willingness and good early speed took him to a position just off the leaders, before visibly quickening one furlong out to take up the running. On hitting the front, he showed a small amount of babyish inexperience, but he quickly overcame this to win going away at the line (see Figure 1). It was all over in fractionally over a minute, but the satisfaction and excitement felt by all involved was immense. A golden day.

The team was delighted a few weeks ago to welcome back Show Me from his annual winter break at Ontoawinner’s Bursea Lodge in East Yorkshire. After a mixture of rest, paddock turn-out, and lunging exercise, the horse has returned for the new season in fantastic condition. Having spent a fortnight on our treadmill facility (see video), the five-year-old is now back in light ridden exercise – which will gradually be increased in the coming days and weeks (see Figure 4).

We have hopes that the five-year-old and ‘complete gentleman’ as Mr Cagney describes him, will continue the good form he showed last season in the inaugural Racing League. He plundered some very good prize money for the yard with a win at Lingfield and a second at Newcastle in the months of August and September (see Figure 3). Plundering riches is quite a talent of Show Me’s, as Cagney explains:

Nine times out of ten he wins me best turned out. It’s quite odd as essentially, he is quite a plain, bay horse – but he definitely scrubs up well! I’d say he’s won me about £1500 over the years! (see Figure 2)