Something called the Cheltenham Festival happened this week. With no runners to speak of there and limited chances elsewhere, we were somewhat scratching our heads this week as to what to base this feature around. Fortunately, the Henderson/de Boinville axis threw us a very juicy bone on the Tuesday when Marie’s Rock battled to victory in the David Nicholson Mares’ Hurdle.

In so doing, Marie’s Rock provided her owners, Middleham Park Racing, with a second winner at the Festival; following on from Junior’s 2011 demolition in the Kim Muir Handicap Chase. It was also the syndicate’s 50th pattern success, under both codes, since the organsation’s founding in 1995.

Since then, it has also provided its members with 1,300 winners and three Group 1s on the turf. In tandem with these statistics, Bloodstock and National Hunt Manager Tom Palin, asserts that the syndicate’s principal aim is to, ‘bring the highest quality racing to the man on the street’ and, ‘with the help of fantastic trainers like Richard Fahey, take our members to all the big festivals’.

Imitating Marie’s Rock, who brought with her 22 members and 33 supporters in total on Tuesday, Musley Bank has its own ‘festival class’ Middleham Park mare to campaign this year. Bought privately by Ross Doyle as a two-year-old in 2020, Ventura Diamond crowned a successful juvenile year with a brave win in the Listed Bosram Sham Fillies’ Stakes at Newmarket. Last season, as a three-year-old, she failed to record a win from nine starts, but Palin reflects that he and the team were, ‘thrilled with the way she steadily progressed through the year’.

Third and second in two Listed contests in May, she ran three solid races across the summer before running a stormer in a soft-ground renewal of the Group 3 Bengough Stakes at Ascot in October. Sent off 50/1 that day under Dave Allan, the mare battled fiercely against Charlie Fellowes’ Vadream and the Queen’s horse King’s Lynn to finish a length and a half behind in third. With the ground again in her favour, she was sportingly sent back to Ascot for the Group 1 Champions Sprint a fortnight later. Held up at the back of the twenty-strong field under Jamie Spencer, she showed tremendous honesty and determination to again outrun her odds (100/1 this time) and finish a close seventh.

Her final run of last season at Chantilly was not her finest, but she importantly returned to Malton happy and sound – ready for her winter break. Over that break she has struck up a fine relationship with Musley Bank yardsman Mark Granger. Granger often speaks of the mare’s ‘lovely nature’ and is so uncomplicated that, ‘you don’t know you’ve got her!’ Now back in full training, yard secretary and regular rider Cathryn Walby also testifies to the mare’s fine character – describing her as the ’nicest and kindest filly I’ve ever ridden’.

With talent and temperance to hand, her trainer predicts a return to the winner’s enclosure for the now four-year-old:

She progressed really well last year and is sure to have a great season this year when the conditions are in her favour.

Palin confirms that the daughter of Dandy Man’s ability to handle soft/heavy going is a major, ‘string to her bow’. He asserts that in high quality sprinting fields, ground of that nature often, ‘eliminates the chances of two thirds of the field before the off’. Resultantly, it will be the plan to enter Ventura in all the big six-furlong sprints before assessing the conditions as each race comes around. Let’s hope we have a very British summer!

Whilst Ventura has been busy throughout the winter dreaming of Diamond Jubilees and Sprint Cups, another of Middleham Park’s representatives, Outrun The Storm, has applied himself to good effect on the all-weather. Just over a month ago, the son of Footstepsinthesand recorded his third career success at Newcastle under a pillar-to-post ride from Jack Garritty.

Despite Garritty reporting that the horse, ‘switched off well’ that night, and groom Jeff Smith’s assertions that his charge is a, ‘very relaxed horse to lead up’, the Storm is naturally a very keen and exuberant galloper at home. As Palin, quips, ‘the horse thinks he’s Frankel, rather than a horse rated in the 70s!’ To prevent the horse over-exerting himself therefore, he spends a fair amount of his time one of the equine treadmills we have here at Musley Bank.

Treadmill operator Colin Hazell, describing the horse as a, ‘gentleman to deal with’, here relays the specifics of the Storm’s exercise routine:

He spends seven minutes on there in total. One minute walking and three minutes trotting, before cantering for three minutes at thirty-five kph. In all he covers about one and three-quarter miles. It certainly keeps him very fit!

A, ‘smooth traveller who can pick up off a strong pace’ as Garritty describes him, the gelding may be beginning to realise his full potential – as his trainer outlines:

I still feel we haven’t seen the best of him and I’m sure he’ll be winning plenty of races over six and seven furlongs.

Win or flop, he is certainly one to keep an eye on in the coming weeks and months. Let’s hope his career barometer will swing nearer the Frankel marker than his current mark of 75!

Ones also for the notebook this 2022 are the two two-year-olds that Middleham Park have in training with us this year. The first of these is a Gutaifan colt out of Senafe – a Byron mare who finished third in the 2013 German 1000 Guineas. Recently named Hattam, and with shares still available in him, Tom Palin gives us his thoughts:

He is a gorgeous-looking, big, strong horse with a sensible nature and a good mind. Richard has informed us that the horse is relatively forward and is already showing some positives signs in his work. He topped his sale in France (€50,000 from the Osarus September Yearling Sale), where we’ve had luck in the past with Boitron (Listed winner for Richard Hannon), so we hope this one will do OK.

The second is a Mayson filly out of Dandy Man mare and ex-Musley Bank inmate Ventura Jazz:

She has a bit of size and scope and the early signs have been positive. We’re hoping she’ll be a nice, mid-season type.

The roars of Cheltenham have subsided, and the sound of the turf increases with each passing day. The Lincoln meeting is to be staged this time next week, bringing with it the promise of sunshine and days of glory. Musley Bank hopes to share plenty of those days with Middleham Park Racing in the months ahead. 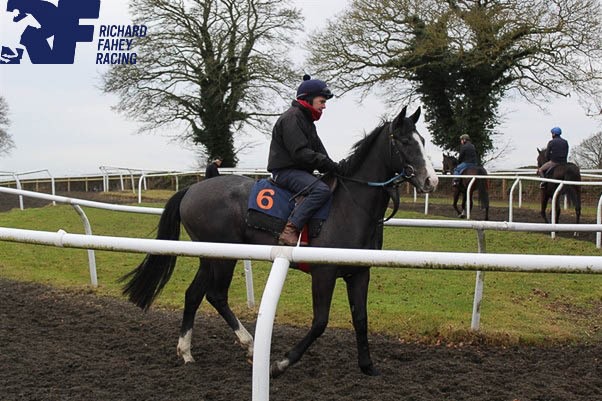