Patsy Fagan won his second race in a row on Friday at Lingfield, keeping on well to score by half-a-length under jockey Hollie Doyle. Settled in midfield, he was shaken up and began to make headway from two furlongs out. He was then ridden and led a furlong out, keeping on well inside the final furlong to record his second career victory. Congratulations to owners Farranamanagh & Partner. 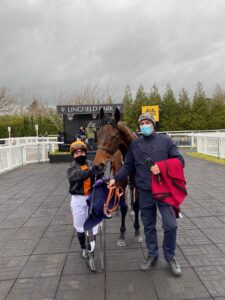