Escape Route became our first two year old winner of the season scoring by a neck on debut under a good ride from Danny Tudhope. He was slowly away to begin with and turning into home he was racing five wide, but from two furlongs out he made headway to catch and then pass the leaders, keeping on well to win. Congratulations to owner Steve Parkin and Clipper Logistics. 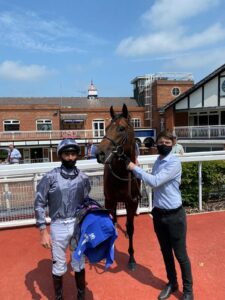